The Westwood Place is located at Filwest Avenue along Tanza-Trece Road in Barangay Paradahan, Tanza, Cavite.

The municipality of Tanza is one of the 23 municipalities and cities that comprise the Province of Cavite. Tanza is found in the northwestern part of Cavite and is bounded by the Municipality of Rosario to the north, Municipality of Naic and Trece Martires City to the south, Municipality of General Trias to the east, and the Manila Bay to the west. The major industries in Tanza are fishing and farming but in recent years, it experiences rapid urban growth where other industries have started to grow in this area. The rapid urbanization could be attributed to the many housing projects in Tanza as well as its proximity to the Cavite Export Processing Zone.

One of the greatest achievements of Tanza is that the municipality was named most competitive in economic dynamism in 2014 by the National Competitiveness Council. This makes Tanza a great place for new professionals and those seeking to establish their own businesses in various industries. And if you would like to choose Tanza as your new home, getting a house at the Westwood Place is a good option.

How to Get to the Westwood Place

Via South Superhighway
Take the Carmona Exit and then turn right at Governor’s Drive. When you reach the Tanza-Trece intersection (the landmark here is the Provincial Capitol), turn right and the drive straight until you reach the Filinvest West Avenue. The Westwood Place is just right along the entrance.

Via Cavitex
When you are already navigating at the Cavitex, turn right at Binakayan Road and drive straight until you reach EPZA Road. Drive straight again until you reach Puregold Tanza. Upon reaching this place, you need to turn left at Tanza-Trece Road then proceed straight until the Filinvest West Avenue. If you are not familiar with this place, your landmark is a 7-11 store at your left side. The Westwood Place is right along the entrance.

Establishments near the Westwood Place:

The Westwood Place is easily accessible through the major thoroughfares, namely: Cavitex, South Superhighway and the Coastal Road. It also has a strategic location giving you convenient access to everything you need. Most importantly, public transportation is available in this place so you should have no issues when going in and out of the community. 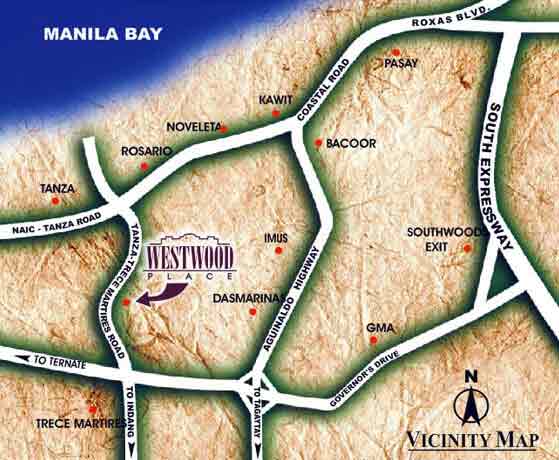